Legends of the Links

Inaugural Inductee - Legend of the Links – 1992

Ed Posh was the first Head Golf Professional at the Village Links. He developed an extensive schedule of golf events that was unique in public golf. He started the Glen Ellyn Open in 1967, and later added the Junior Championship, the Husband-Wife championship and the Senior Championship. He developed series of events for Mixed Couples, Juniors, Seniors Over 60, and Permanent Time Players. The Village Links Junior Lesson Program, started in 1967, has grown to be the largest such program in the Chicago area.

Ed always went out of his way to make all visitors to the Village Links feel welcome. He made a great effort to meet as many people as possible, and, as a result, knows literally thousands of Village Links visitors by name. Ed has been a personal ambassador of goodwill, whose name has been synonymous with the Village Links.

In 1992, Ed became the inaugural inductee into the Legends of the Links. In October 1995 he retired as Head Golf Professional. He remains associated with the Village Links as Golf Professional Emeritus and works tirelessly on behalf of the Ed Posh Scholarship Fund.

Lee served on the Recreation Commission from 1968-1975. He became chairman in 1968, essentially serving as an unpaid General Manager, visiting the course almost daily. Lee drew upon his experience in the bowling business to help develop the golf business at the Village Links. He negotiated our first lease/purchase of motorized carts, he recruited food service concessionaires, and encouraged the planting of trees on the barren golf course.

When the Village Links proved to be successful, Lee led the effort to expand the golf course to 27 holes. He appeared before community groups, made sure that the public understood the plans, and convinced voters to approve the referendum that authorized the expansion. During construction of the golf course, he dealt with delays resulting from the bankruptcy of the general contractor. He supported the idea of staff serving as general contractor to complete the project. He left the Commission just as the third 9-holes was completed.

While serving on the Board of Trustees in the early 1960's, George Winchell became aware of the problem of flooding confronting the Village on the south side of Glen Ellyn. He was also aware of the need for the Village to expand its recreation offerings. He became the driving force behind the development of a municipal golf course in Glen Ellyn.

George Winchell was involved with every aspect of the development of the Village Links. He and a few friends gathered general information about the feasibility of a municipal golf course in the early 1960's. He approached the Village Board of Trustees and was put in charge of a committee to study a "Storm Water Disposal and Recreation Area" in 1962. It appears that this committee eventually became the Recreation Commission around 1966. George served as the Chairman of the Recreation Commission through 1969.

During this time, George seems to have played the role of a volunteer project manager. He sought out professional expertise in engineering, golf course design, construction and maintenance, finance, and land acquisition. He was heavily involved in selling the referendum to build a course and established dialogues with various community groups including the school districts and the Park District. He over saw construction of the course. He hired Ed Posh as the first Golf Professional, and Ted Sokolis as the first Golf Course Superintendent.

Once the course opened in 1967, he played the role of a volunteer General Manager. He prepared early operating budgets, and set up financial controls. He approved disbursements and regularly reported to the Board of Trustees.

The Entrance road into the Village Links is named Winchell Way in his honor.

David Gill was selected to design the Village Links golf course. He also designed the Link-Up Nine expansion opened for play in 1975. In addition to being a golf course architect, he was a civil engineer. This was undoubtedly helpful in designing the Village Links, because he was better able to incorporate the golf course with the flood water retention system. Dave successfully convinced the Village that they should build a more than the typical public golf course. His design of a 6,900 yard course with bentgrass tees, watered fairways, and numerous sand and water hazards, was radical in its day.

The Village Links was one of Dave Gill's most noteworthy golf course designs. He designed more than 50 courses in 13 states, mostly in the Midwest. Other courses designed by Dave Gill include:

Since most of the individuals working on this project were either contractors or volunteers, Bill helped make sure that the project stayed on course and that details were taken care of. For example, he had Gil Cokinis set up a hot dog stand as the first food service at the Village Links before we had a clubhouse. Gil Cokinis operated the food service at the Village Links as a concession from 1967-1974.

Bill was probably the individual who came up with the idea of applying for a federal matching funds grant for the purchase of open space lands that became the cornerstone of the 1972 referendum that expanded the golf course.

Bill Galligan retired as Village Administrator after the construction of the Link-Up Nine in 1974.

Bob Becker served on the Recreation Commission from 1969-1981. He was a significant contributor in many Commission activities. He became the Commission's third Chairman in 1975, succeeding Lee Hesterman.

Bob was heavily involved in developing and selling the 1972 referendum that expanded the golf course. During his tenure on the Commission, the Link-Up Nine was built and opened for play in 1975, and the clubhouse was expanded in 1977. The Commission addressed a variety of policy issues during this time, as the golf business doubled and redoubled in size. These issues included how to provide food service and how to handle Permanent Starting Times.

Keith Nicolls served on the Board of Trustees during initial discussion about the possibility of developing a municipal golf course, and during the original referendum in 1963. He was Village President when the Village Links opened for play in 1967. A $225,000 revenue bond issue was sold during his term in office, to complete the golf course and build the original clubhouse.

Keith served on the Recreation Commission from 1976 until his death in 2001. During that time, the clubhouse was expanded twice (1977 & 1985), the Village took over daily responsibility for the Pro Shop and Food Service that had been operated through concessionaires, the 18 hole course was closed to regrass the greens in 1981, and the fee structure was revamped in 1988.

Ted Sokolis was the first Golf Course Superintendent at the Village Links. He began work in July of 1965, while the course was just under construction. He built the original maintenance building, and was on site throughout the construction of the course. Ted established a quality of course maintenance consistent with Dave Gill's design. The Village Links quickly became noted for its first rate playing conditions.

In 1972, as the golf business was expanding, and the referendum to build an additional 9 holes had been approved, Ted was promoted to the new position of General Manager. As General Manager, Ted over saw the construction of the new 9 holes. When the golf course construction contractor went bankrupt after finishing only 15% of the job, Ted became the defacto general contractor. He completed the remaining 85% as designed. He later supervised the construction of the halfway house in 1976, the expansion of the clubhouse in 1977, and the expansion of the driving range in 1982. Ted's decision to regrass the greens in 1981 was a bold move that probably saved the Village Links from several years of business disruption. He left the Village Links in July of 1984, just after plans to expand the clubhouse in coming months had been approved.

Ted established much of the organizational operating structure employed at the Village Links today. He is responsible for establishing the work ethic, and the focus on efficiency and quality that still distinguishes the Village Links.

Marge contributed to the success of the Village Links on several levels for more than 20 years. Her participation in the Village Links included significant stints as a golfer, a policy maker, and as a volunteer. She was active in both the Swingin' Set ladies golf league and the Ladies Travelling Team. Marge served on the Recreation Commission from 1980 through 2000, helping the golf course work through a variety of issues over twenty-one seasons. She was Chairman of the Recreation Commission in 1985 when the Village Links Clubhouse was expanded. She served on the Board of Directors of the Ed Posh / Village Links Scholarship Fund during the first three years of that organization's existence. In 1998, Marge Faulkner was the first woman to be inducted as a “Legend of the Links”

Dave began working at the Village Links as a high school student in 1980. He continued working at the course as a key seasonal employee on the golf shop staff through 1987. Dave played golf at the Village Links as a junior golfer. He played golf for Glenbard South High School, the College of DuPage, and South Florida College. He won the Glen Ellyn Open three times in 1980, 1982 and 1983. While in high school, Dave began experimenting with fixing up golf clubs in his garage. He began doing repairs for the Village Links and other local golf courses. His business expanded and he founded Tour Edge, a company that offered club repair services in addition to manufacturing golf clubs. Today, Tour Edge is located in St. Charles, Illinois and has accounts world wide. In 2000, Golfweek Magazine recognized Dave as one of golf's most influential young executives, naming him to their list of "40 Under 40". Dave was one of three Glod brothers who worked at the Village Links in the 1980's. His brother Gordon, one of Tour Edge's first employees, also worked at the Links.

Doug began golfing at the Village Links when the course first opened. He played golf for the College of DuPage in 1967 and 1968. Around 1969, in a casual round playing from the white tees, he had one of the most remarkable rounds ever played at the Village Links, posting a 9 under par 63. That was the low score ever recorded on the original 18-hole layout. Doug won the Glen Ellyn Open in 1968 and 1969. He turned professional and began working at the Village Links as a seasonal employee in 1971. He also began giving golf lessons at the Links. In 1976 Doug left the golf course staff to teach golf full-time. In 2000 Golf Digest magazine named Doug one of the top golf instructors in Illinois. Doug has served on the Village Links Professional Instruction Staff since 1971.

Roger became a seasonal member of the Village Links golf staff in 1974 and worked in that capacity for thirteen years. During this time he was an educator, basketball coach and golf coach. In 1986, Roger was hired as Director of Golf at the Village Links, a position he held through 1990. While serving as Director of Golf, Roger attained Class A membership in the PGA. Early in 1991 Roger left the Village Links to become Head Golf Professional at Seven Bridges Golf Club in Woodridge. Currently he serves as Director of Golf at Kiawah Island Resort, Kiawah Island, SC. Roger has held several Section and National offices in the Professional Golfers of America. He served as President of the Illinois Section of the PGA, 1998-99 and President of the PGA of America 2005-2006.

Ready to Reserve your Tee Time? 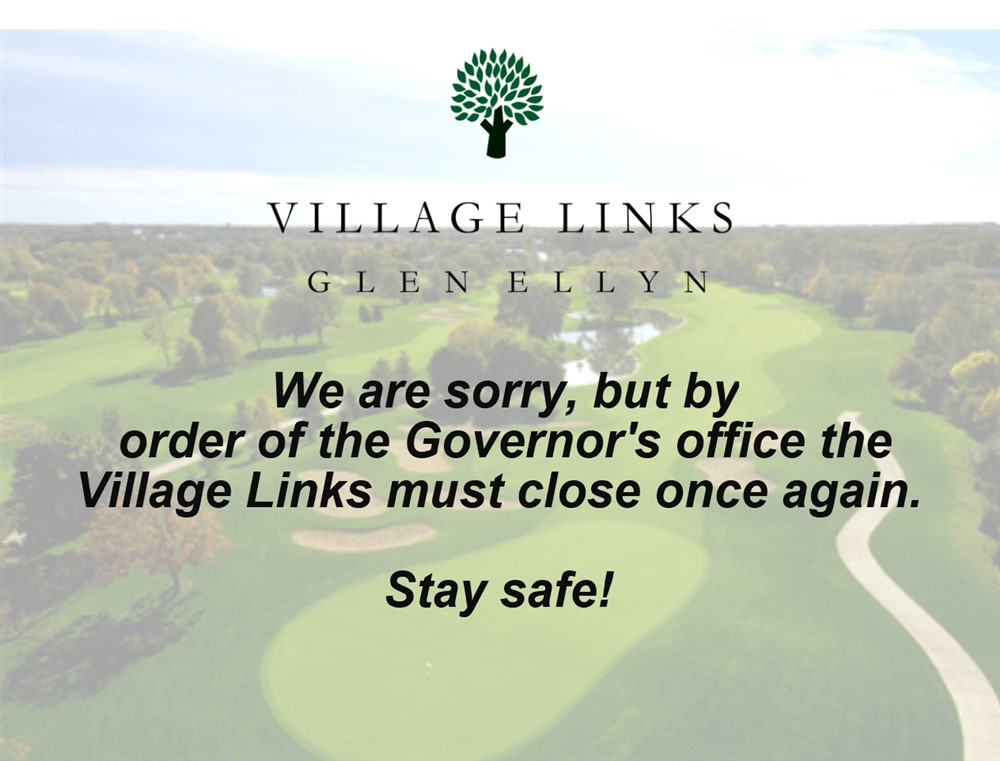